Why We Broke Up, by Daniel Handler 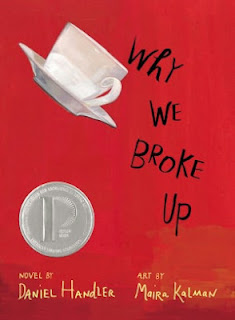 In an effort to purge herself of the bad memories, film fan Min assembles a collection of momentos from her relationship with Ed and explains the significance of each one of them to her ex-boyfriend.

That's basically the entire plot, which is one way of saying this is a pretty indulgent story (certainly, if I was on the receiving end of her diatribe, I'd probably just laugh it off -- after all, who needs to spend the effort worrying about such a drama queen?). But, thankfully there's a subtext here that is more interesting: the process of rehashing the relationship is ultimately cathartic for Min, as she realizes the mistakes she made and what led to them. Overall, it's a low-key variant of Jay Asher's Thirteen Reasons Why (with the obvious differences that Min doesn't kill herself and one doubts that boyfriend Ed would really give a shit about Min's letter).

Overall, it is exactly what it claims to be: the story of a break-up. And, as much as it has been critically acclaimed, it simply isn't that good. Yes, the illustrations by Maira Kalman are clever and the book has a thick literary quality to it, but it's also amazingly pretentious. From the faux film-buff references to the drawings themselves, it's the type of book that no one reads except to prove something. The story doesn't go anywhere, the characters do not elicit sympathy (heck, you might see yourself in Min's psycho-obsessive melodramatic personality, but that's not something to be proud of!), and in the end you're left with that thought of "what's the point of all this?" Books like this are the reason I distrust the distinction of being an ALA winner.
Posted by Paul at 2:06 PM