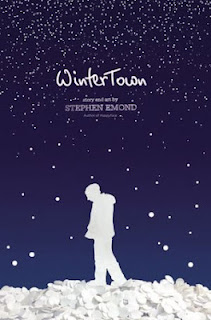 Ever since Lucy moved away with her mother, Evan and Lucy only get to see each other once a year, around Christmas. And while they started with similar passions, they've slowly become different people: Evan is a straight-A student who can't quite gain the confidence he needs to stand up to his father, while Lucy is the angry goth whose home life has gone to hell. But together again for another two-week visit, they try to recapture the magic of their childhoods, while exploring what the future could offer them. To liven things up, the novel features frequent graphic novel-like interludes from both Evan's comic drawings and some more realistic art from Emond.

Stylistically, this book makes a great foil to my just-completed review of Why We Broke Up. Unlike that book, Winter Town's artistic elements add to the story by creating several additional dimensions. And, while I'm not a graphic novel fan, I appreciated the intent of their addition. I was less taken by the story or the characters, which I found underdeveloped (Emond put so much effort into the design of this striking book, that the characters suffered). The writing (particular towards the end) grows stilted and the story unravels. It needed more work, but I appreciate its originality.
Posted by Paul at 2:53 PM