The Gospel According to Larry, by Janet Tashjian 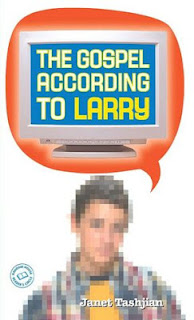 When whiz kid Josh decides to start a website to promote his anti-consumerist rants, he does it initially to resolve his boredom. He decides to keep it anonymous (using the name "Larry" as a pseudonym) and, as an experiment, tries to promote it at school through a fan club. He never imagines that it will amount to much. But, before he knows it, people across the country tune in to his site and its message. Millions of people become fans and it spawns a festival and even (ironically) various consumer fads. As Larry's popularity grows, Josh struggles with whether he should reveal the true authorship or not.

In some ways, Tashjian was a bit ahead of her time when the book was written in 2001. However, eleven years later, a blog going viral isn't much of a story. The critique of consumerism also seems like a dated concern (or rather, it is treated so innocently compared to what we see today). In sum, the story is well-written and the book is a quick read, but it really doesn't have as much to say in today's more cynical world.
Posted by Paul at 2:54 PM