The Mockingbirds, by Daisy Whitney 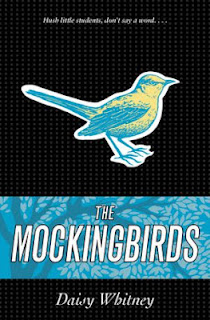 When Alex wakes up in Carter's room, she isn't initially certain how she ended up there. And when she realizes that she's had sex with him, she can't figure out how it happened -- the night before is simply a blur. It takes her a while and some encouragement from her friends to come to the realization that she was raped.

She doesn't want to go to the police. She's ashamed of her own behavior and worried that she brought this on herself. But she learns of a group of students at her school called The Mockingbirds who quietly run a peer court to judge cases like this. Despite her fears and shame, she decides to use the system to take a stand.

For what is an important subject and a decent attempt to shine a sympathetic light on it, the premise of the story is surprisingly silly (the adults and school administrators in particular are portrayed as worse than useless, while the students are wise beyond their years) and the storytelling is clunky. An awful lot of effort is expended to explain the intricacies of the court system the students have created, while the story itself tends to drift into underdeveloped subplots (Alex's music, for example). There are times when the plot becomes contradictory as if revisions were half-finished. In sum, this is no Speak.

All that said, I really liked Alex herself. She's strong, reflective, and sympathetic. Whitney has an agenda (one that I'm sympathetic to) and Alex is the vessel of that plan, but I didn't mind the preachiness because I liked her so much. Strong character development and a kick-ass heroine goes a long way towards helping me to like the book.
Posted by Paul at 2:01 PM