Queen of Secrets, by Jenny Meyerhoff 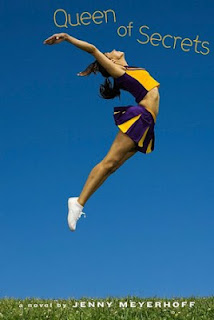 Essie is starting her sophomore year off on a good note. She has made the cheerleader team and Austin (the cute football player she's been eyeing) has started to notice her. But it could all be ruined by her geeky cousin Micah whose insistence on wearing a yarmulke to school has kids teasing him. When that teasing turns nasty and escalates into more dangerous things, Essie finds herself forced to choose between the fun life she was planning on enjoying and standing up for her family. The fact that her family has been hiding things from her simply complicates matters.

While pitched for a younger teen audience, several mature themes (including a fairly explicit sex scene) will probably flag this for some nervous adults. That's a shame, though, as the book tackles a lot of great identity issues that will resonate best with younger readers.

For myself, I found the writing style to be a bit preachy and the morality issues depicted too black-and-white -- in a style which seems to suggest that the author doesn't quite trust the readers to figure it out on their own. However, I liked the subject matter and the pace was right. The characters are complex (even though Essie is essentially a good girl, she gets to make a few mistakes). Peer pressure becomes an easy scapegoat, but in this case that felt right. In sum, a decent book for younger readers (older ones will probably find it too simplistic).
Posted by Paul at 10:38 PM