The Scorpio Races, by Maggie Steifvater 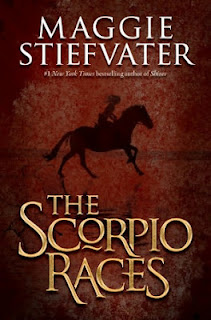 Every Fall, on the island of Thisby, the sea brings forth the capaill uisce -- the water horses.  These fierce carnivorous cousins of terrestrial equines are captured and raced by the local inhabitants.  It's a dangerous pastime and riders are routinely mauled or drowned by their steeds.

Years ago, Sean's parents were killed by a capall uisce. As an orphan, Sean has devoted himself to mastering the skill of riding them.  For four years running, he has won the annual race, but has been unable to acquire the one thing he wants in life.  Meanwhile, Puck lacks Sean's experience, but she is motivated to win the race for its large cash prize in order to pay the debt on her home.  While her chances are slim, she hopes that by buying back her home she can convince her brother to stay on the island.  Lack of experience is only one of the hurdles she must face.  The islanders resist her attempt to race on principle -- no woman has ever tried to do it before.

While horses and horse racing are not my thing, I really admired this book.  The story is complex, both in terms of the interactions of the various characters and also in the details of the culture of Thisby.  Modeled on a British isle somewhere, the locale never quite connects totally with reality.  Still, this is not really a fantasy story either as Steifvater periodically brings us back to the real world.  It's as if this were an altered parallel universe -- like our own except for the existence of flesh-hungry water horses!  That vagueness of time and place is very effective and gives the story a sense of timelessness that will keep it fresh for years to come.

I have had trouble with Stiefvater's writing in the past.  While I attempted to read it, I never managed to get through Shiver. In the past, her style always seemed inaccessible and overly artsy.  This novel is a different experience altogether.  It's suspenseful, surprising you all the way up to the end.  And it's a story with the potential to excite a mega-audience, like The Hunger Games.  How can you go wrong with a fierce heroine, nasty monsters, and a dangerous climactic race?
Posted by Paul at 7:16 PM