Where Things Come Back, by John Corey Whaley 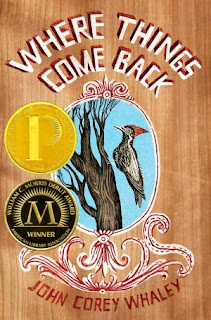 Cullen struggles with the death of a cousin to drugs and the disappearance of his younger brother. His parents are falling apart, but what bugs Cullen most of all is all the hoopla over the supposed sighting of an extinct woodpecker and the ass-hats of his little town of Lily who try to cash in on that attention.

In parallel, a separate (and more interesting) storyline traces the failed missionary work of Benton Sage and his college roommate Cabot who in turn becomes obsessed with the forgotten Ethiopian Orthodox Bible and its story of Archangel Gabriel's betrayal of mankind. And while the two stories seem completely unrelated until nearly the very end of the book, they intersect in a significant and deadly way.

What you end up with is a critically acclaimed, Printz-award winning story that isn't actually about much of anything. Some people claim it is a coming-of-age story, but Cullen really doesn't change all that much. What's striking in fact is that, while a lot of interesting things happen to the characters, none of them are interesting in themselves. Not only is this not a true coming-of-age book (which would require a dramatic arc of some sort), but it isn't a YA book either. The major protagonists are post-adolescents and their concerns are mostly those of adults. If anything, the story reminded me of John Irving's The World According to Garp, but without the clever satire of that classic. It's well-written and original, but hardly the best book of the year.
Posted by Paul at 7:16 PM