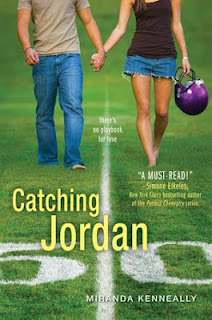 Jordan is an amazing quarterback, has led the team to State, and dreams of playing for Alabama after high school.  The fact that Jordan is a girl has never bothered anyone on her team - they know she can play ball.  But for Jordan's father, it's a big deal and she struggles with proving to him that she deserves to follow her dreams as much as any boy. The real challenge, however, comes when a new player joins the team.  Ty is different.  He's an excellent player and a stunning quarterback in his own right.  His arrival threatens Jordan's standing in the team, but, more than that, Jordan can feel herself falling for him.  Is there room in Jordan's dreams for a boy as well?

By all rights, I should despise this book.  I have no issue with romances, but the premise from the blurb ("What girl doesn't want to be surrounded by gorgeous jocks day in and day out?") is gag worthy.  Add in the fact that this is a book about football, and it should send me retching.  But sometimes if you take two toxic ingredients and put them together, you can make magic.  For me, this is really a book about an unusual young woman who stands up to male chauvinism with aplomb and finds a balance between love and career.  Dad is a bit of a two-dimension dweeb, but just about everyone else stands up off the page as a real character.  Jordan's relationship with Ty has real life in it and the author does an outstanding job at portraying the ups and downs of teen romance.  The boys on the team have personalities and Jordan's relationship with them felt natural and authentic.  You really don't need to know anything (or care) about football, although it doesn't hurt.

On a side note, the art department deserves a raspberry for the cover.  I might accept the boy on the left as a football player, but there's no way that Little Miss Waif on the right can toss a pigskin as well as Jordan does.  Kenneally is pretty clear that Jordan is a big person with a solid build.  The girl depicted here doesn't have enough meat on her bones to perform.
Posted by Paul at 12:29 PM