The Cupcake Queen, by Heather Hepler 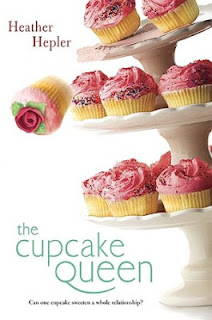 Penny's been laying low in her new hometown of Hog's Hollow, ever since she and her mother moved in.  She knows that she'll eventually have to start school and meet the local kids, but she keeps hoping that her parents will get back together and she and Mom will move back to the City. But just a few days before school begins, she is helping her Mom cater a birthday party (Mom runs a cupcake bakery) and disaster strikes -- the sort of disaster that ruins the party.  Unfortunately, the birthday girl is Charity (the most popular girl in Penny's new class) and she sets out on a vendetta to ruin Penny's life.  Not that Penny needs any help in having her life ruined as she deals with her parents' separation and her mother's inability to communicate.

While the story starts out strong and has a good heart throughout, there's no getting around the fact that it is largely recycled.  Hepler doesn't really have much new to say about divorce, moving to a new town, or trying to deal with relationships.  The story itself is uneven. The cupcake angle really could have been played up much more, the endless bullying from Charity gets tiring and could have been reduced, and the boy interest is largely wasted. The relationship between Penny and her friend Tally is more interesting, but again strangely underdeveloped.  What Hepler does have is a breezy style and a sense of fun, but she seems to have struggled with the story.
Posted by Paul at 7:55 PM