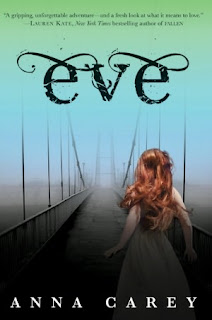 In this new dystopian series, a plague has wiped out the bulk of the population.  Young orphans are sent to boarding schools to learn trades.  Eve is one of them -- a star pupil who plans to graduate as the Valedictorian and become a shining example for her peers.  But when Eve has a chance encounter with a local troublemaker named Arden who is trying to escape from school, Arden triggers Eve's curiosity about why they have never seen any of the graduates again after they leave.  Some last minute snooping uncovers the horrible truth about the program and the fate that awaits her.  Determined to not suffer that outcome, she flees and joins Arden in the wilderness.  Along with the help of a boy named Caleb, the young people make a run for a haven called Califia.

Having realized only a bit late that this was one of those pre-fab YA monstrosities from Alloy, I almost put it down, but I was stuck on a plane without anything else to read and it was a quick page-turner, so I gave it a shot.  As one would expect though, the story is formulaic and largely lifeless.  The post-apocalyptic scenario lacks originality (plague?  oh please!).  The situation is implausible (only a pre-teen would believe the baby-farm idea) and exists mostly to serve as an excuse for the inability of any adults to be useful.  The romance (this being an Alloy-committee production) is the retreaded forbidden love concept.  In sum, you can kill time with this, but the cynical commercialism of the series makes it a last resort.
Posted by Paul at 3:39 PM