The Fault In Our Stars, by John Green 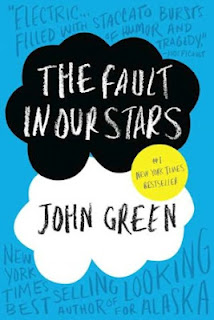 John Green is a frustrating writer for me.  I absolutely LOVED his first book, Looking for Alaska, but his subsequent books seemed silly and fluffy.  His collaboration with Levithan was stupid and beneath him.  His aesthetic compass, in short, too easily thrown off by side projects.  But this book truly recaptures the beauty of his debut and kicks it up several notches.  I won't claim it is the Best. Book. Ever.  But I will claim it is one of the best books I've ever reviewed.  Thank you, Mr. Green, for restoring my faith in the genre.  Now, I guess I had better tell you the story....

Hazel and Augustus are adolescent cancer survivors, a status that they are ambivalent about, partly because of how it pigeonholes them in society, and partly because they don't really believe in survival. Before Hazel's miracle cure with an experimental drug, she was basically a goner.  And Augustus's recovery seems similarly tenuous.  But for two kids without much hope for the future, finding each other gives them something to hope for.  Together, they share a love for a novel called An Imperial Affliction which they agree captures the true pointlessness of their condition and a similar dedication for a series of blood-drenched military novels based a first-person shooter called "Price of Dawn." It's an uncommon match.

Thus, before anyone gets the idea that Green's latest book is a re-make of A Walk To Remember, you can be relieved to find that there's enough attitude here to shake you of that.  Self-pity isn't really the name of the game, and these wise-assed kids have enough irreverence to be funny and enough heartache to remind you that this isn't a comedy either.  The young people here are wonderfully insightful, realistically reflective, and as anti-stereotypical as you could find.  The result is an extremely well-developed character study of what dying means when you are young (and it's happening all around you).

Knowing that a story like this has a sad ending (why wouldn't it?) won't protect you from the devastation that awaits you.  But that really isn't the point.  Far more important is the message about trying to make a difference in a world where we all die (some just sooner than others).
Posted by Paul at 5:15 PM