The Miseducation of Cameron Post, by Emily M. Danforth 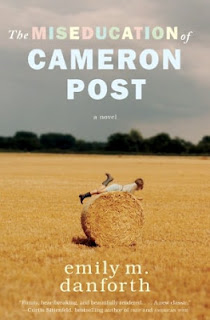 Growing up in Miles City MT as a gay curious and outspoken teen hasn't been easy for Cameron.  While she isn't certain, she senses that her parents wouldn't approve of her explorations into homosexuality, but since they died in a car accident, she doesn't have to worry about confronting them.  Instead, for the first two hundred pages or so of this coming-of-age novel, we get the details of the furtive explorations that Cameron engaged in.  As such, this ostensibly fictional memoir is a detailed and authentic tale of growing up gay in a hostile environment.

But when Cameron is outed and sent to a boarding school to be re-educated (and have her sinful past exorcised), the story takes a turn into very dark territory.  The school she finds herself in isn't itself such a horrible place, but the sheer milieu (where anxious and fragile teens are bullied by prejudiced and clueless adults) is disturbing reading.  In spite of the challenges she faces, Cameron remains true and insightful enough to recognize the hypocrisy of the adults around her, even as she stays honest and recognizes that she hasn't figured everything out either.

The result is a striking book that reads far too authentically (and detailed) to be merely fiction.  Whether Danforth based the story on her own life, the life of a friend, or an amalgam of both isn't very clear, but it must be true.  And while it really shouldn't matter, it bothered me throughout the entire book.  The story is outstanding, but if it is simply autobiography than it could be a one-hit wonder.

Danforth has a fluid and florid style which displays great talent at writing beautiful prose.  She is tempted a bit too often for my liking with the need to drag everything out (as witnessed by spinning a 470-page story!), but no one could fault her crazy skills.  Not a single character in the story remains undeveloped.  While more than a few are hard to like, you come out at the end truly understanding each and every one.  That shows a sensitivity for the complexity of fear, homophobia, hormones, and uncertainty that underlie so many of the actions in the story.  Yes, Danforth certainly has an agenda here, but one would be hard pressed to fault the care she takes to explore various points of view.  That much of this insight comes out of older-than-her-years Cameron's narration is a bit regrettable, but it can be forgiven in the beauty which it is delivered.

It's hard to fault such a well-written and powerful book (especially if LGBT literature is something you support).  I will do so, but simply out of taste (the book was too long and the story too drawn-out). I cannot claim this is a bad book, but simply one I didn't like.  You may well find it incredible.  Regardless, it is certainly worth reading.
Posted by Paul at 9:23 PM