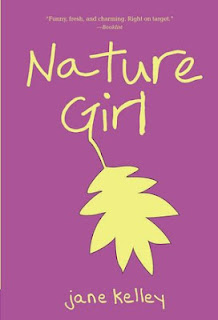 City girl Megan can't possibly imagine a worse summer -- stuck in Vermont with her older sister and her parents, with no computer and no television.  But the worst part of all is the fact that her best friend didn't come with her, so she's stuck in the woods on her own!  Frustrated and angry, she dreams up schemes to rescue her summer, making herself (and her family) miserable.

Then a hike in the woods goes wrong.  Initially lost, Megan finds herself on the Appalachian Trail.  But rather than use this information to find her way home, she decides to set out on a trip that will change her life.

For what the book is (an adventure book aimed at middle readers), it's a surprisingly effective story.  Megan is a bit too annoying at first and her transformation toward maturity doesn't always ring true (for example, when she figures out on her own how to gut and cook a fish), but the storytelling has a predictably pleasing arc.  Yes, we all know that Megan will gain perspective and maturity, but it is no less enjoyable to read about it in the knowing.  The reconciliation with her friend seems tacked on, but offers additional pay-off in the novel's happy ending.
Posted by Paul at 3:03 PM