Once A Witch, by Carolyn MacCullough 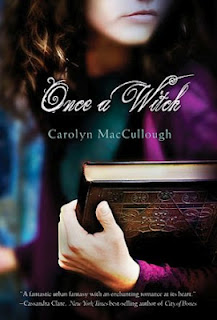 When Tamsin was born, her grandmother predicted that she would become the most powerful witch in the family.  Normally, each member of the family reveals their particular talent by the age of eight.  However, Tamsin's talent never revealed itself.  Now that she is seventeen, it is hard for her to not feel like a failure, particularly compared to her older sister (who is a master at locating lost objects, among other skills).  Grandmother was somehow horribly wrong!

Then a handsome man shows up at her family's store while Tamsin is working and, mistaking Tamsin for her older sister, asks her to help him locate an object.  Flattered, she enlists the help of a friend to do the work and makes a fateful mistake that changes the future irrevocably (and also provides some clue about what her talent truly is).  With barely any knowledge of what she can do, she now must draw on everything she has to save her family from a dangerous curse.

While the story is a bit rough at points, this is truly a clever book for the way it combines teen angst and insecurity with a decent fantasy story of witchcraft and magic.  That won't seem like much since almost all good YA fantasy makes a point to take on a teen's perspective and priorities, but MacCullough does it in an impressively seamless fashion.  Without sacrificing the story, Tamsin's struggles to discover herself and to figure out her place in her family are true coming-of-age material to which any teen (regardless of their own special talent) will relate.
Posted by Paul at 7:49 PM