The Pledge, by Kimberly Derting 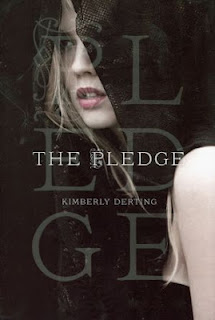 In Ludania, a strict caste system prevails.  While everyone can speak the common tongue of Englaise, the classes each have their own language and attempting to use a language other than your own is punishable by death.  The system, introduced to create peace, has degenerated into totalitarianism and a small group of revolutionaries fight a war to overthrow the queen to restore freedom.

Charlie is a young woman with a terrible secret:  she can understand all of the languages.  It's a talent that could get her killed and she hides it at all costs.  But when she meets a man named Max at a local rave who speaks a language she's never heard before (but immediately understands), he recognizes her for what she is.  To her surprise, rather than turn her in, he promises to defend her.

Billed as a dystopian novel, the story is actually more fantasy, with a mixture of other genres thrown in.  It's also something of a narrative mess.  The novel shifts gears at least three times, each time nearly completely tossing out the storyline in favor of a new direction.  This ratchets up the suspense, but makes less and less sense.  The characters suffer as a result and by the end, I found myself losing interest in who was doing stuff.  I liked the linguistic basis of the story, but even it becomes largely unimportant by the end.
Posted by Paul at 7:43 PM