The Statistical Probability of Love at First Sight, by Jennifer E. Smith 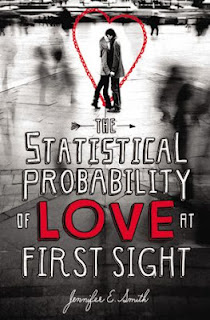 Because of a complex confluence of events, Hadley's managed to miss her flight to London.  She's not all that broken up about it.  Truth be told, she really doesn't have much interest in attending her Dad's wedding to some woman who she's never met.  Getting bumped to the next flight, however, triggers a new and important chain of events.

She ends up sitting next to a young Brit named Oliver, who is heading home to London for an uncomfortable family gathering of his own.  Naturally, they hit it off wonderfully and have a moment on the flight.  But more than that, the experience helps Hadley crystallize her thoughts about her father and how his decisions have affected her.

There's nothing particularly unusual or striking about the story.  The territory it covers is well-tread and hardly original.  But sometimes, an old tried-and-true formula sparkles in the hands of a good writer.  This is a case in point.  Hadley and Oliver are nice characters and the reader is drawn into their story.  Their growth is tangible and, while not earth shattering, it is nonetheless rewarding.  The settings (mostly on the plane, but also some nice London detail) are realistic and entertaining.  This is an unremarkable story, which is nonetheless enjoyable.
Posted by Paul at 4:03 PM