You Have Seven Messages, by Stewart Lewis 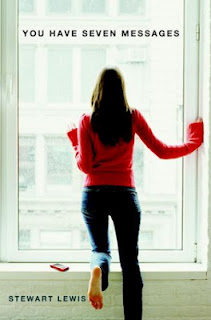 After Luna's mother died, Luna didn't really grieve over her.  Now, a year later, she decides to visit her mother's studio, where she discovers her mother's cell phone...with seven messages on it.  Curious, she starts to listen to the messages and, through them, finds that there is a lot more to her mother's death (and life) than she previously realized. On the side, she also has to deal with her father dating again, the attentions of a boy next door, and her own burgeoning talent for photography.

For a book that could have been so much about internal transformation, this story is awfully cluttered with external (and frequently over-the-top) events.  The fact that she is rich and that her father is famous was distracting enough.  Once we start name-dropping Drew Barrymore and Orlando Bloom, it all got to be a bit too much. And, as we jetted off to Tuscany and took an unsupervised train to Paris, I realized that we were in teen fantasy land.  The story was no longer about growing up, it was about having fun fun fun.  I get that it's great to fantasize, but did we have to go so far off the deep end?  How much sympathy can we really have for the poor little rich girl?

Story inconsistencies pop up as well (how does a phone carried at the moment that Mom is struck by a car magically end up back at her studio?) and Luna herself is jarringly inauthentic (wiser than her years would ever be, with the subsequent lack of room for growth).  The end result is entertaining fluff that is fun to read.
Posted by Paul at 7:30 PM