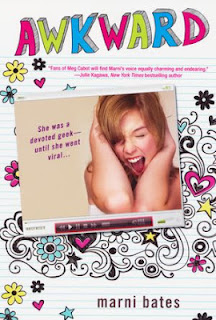 Mackenzie is prone to awkward moments, but when she accidentally knocks over a burly hockey player and then tries to administer CPR to him (completely oblivious to the fact that he's conscious), it's a pretty embarrassing scene even for her.  And that's only the beginning!  A video of the episode shows up on YouTube and goes viral, sending Mackenzie into an entirely new level of notoriety.  Suddenly, a quiet wallflower has gone from being an "invisible" to being famous.  But at heart, she's still who she is and, while the fame is fun, she would really like to get the cute guy at school to notice her.  How awkward!

It's (of course) an entirely silly and overblown fantasy -- definitely in the vein of a Meg Cabot story.  The rich and famous people are entirely too nice.  The kids are all blissfully unsupervised (can't have any pesky adults get in the way of the fun!).  And the most important thing of all is whether the boy will kiss you (symbolic references to academics and career aside).  A cameo from Ellen DeGeneres towards the end takes the story into surreal territory.

Of course, picking away at the unrealistic story elements or worrying if it makes sense is really besides the point.  This book doesn't exist to send a message or make a literary impact, it's simply fun!  Mackenzie is likeable enough, but none of the characters really have any depth.  Interesting subplots (like the father who abandoned her and the travails of popularity) get buried and left underdeveloped because they don't move the story forward (and are largely cliches anyway).  Their inclusion seems more distracting in the end, so perhaps it is better that we focus instead on parties, clothes, and boys.
Posted by Paul at 10:28 AM