Babe in Boyland, by Jody Gehrman 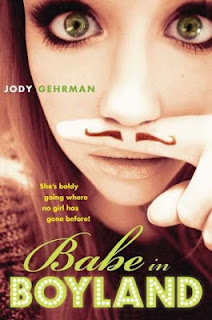 Natalie's been writing an advice column for the school newspaper and it's been one of the more popular column.  But when a group of angry readers point out that she may understand girls, but she hasn't got a clue about boys, she realizes that they're right!  She tries to rectify the problem by interviewing some of the guys at school, but that doesn't work.  So, instead, she hatches a more audacious plan: she's going to go undercover as a boy and spend a week at a local boy's boarding school and figure out how they really tick.  Her plan works remarkably well, but hits a snag when she finds herself attracted to her new roommate.

The premise is cute and hard to take seriously, but the story's appeal to an adolescent audience is obvious enough. While implausible (it's a little hard to believe that Natalie is able to successfully pass herself off as "Nat" for an entire week) but the story is entertaining.  This isn't very heavy stuff (and the conclusion tries too hard to tie everything up with a happy ending), but good points are made in the quest to demystify the opposite gender.  In this particular subgenre, I think E. Lockhart's Fly on the Wall really does a better job of explaining boys to girls, but Gehrman's novel is sweet and pretty digestible.  The editorial intervention towards the end (when Natalie tells the readers what she's learned) will be helpful, even if it seems artificial and forced.
Posted by Paul at 9:01 PM