The Butterfly Clues, by Kate Ellison 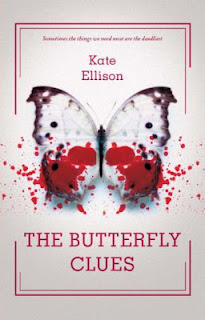 Penelope ("Lo") fixates easily on things.  She suffers from obsessive compulsive disorder, so that's easy to do.  Most of the time, her compulsions (like having to repeat everything three times) simply earn her the ridicule of her classmates, but her latest obsession could turn out very badly.  A young woman in the bad part of town has been murdered and Lo wants to understand why it happened.  With the help of a young vagrant, what she uncovers becomes far more than she can handle.

A quirky and original thriller which showcases Ellison's strong writing.  The book starts off in a rather oblique style and I was honestly afraid that I'd have to shelve the book as unreadable.  By the end, however, the narrative becomes much normal (and even a bit mundane).  For those who like literary pretensions, this is a step down.  For me, it saved the story.  I suspect that we'll come back with mixed reviews on this one!

OCD can be hard to depict sympathetically.  Truth be told, I found myself frequently as frustrated with her personality quirks as Lo's father is depicted as being.  It's hard to relate to someone who continually complains about being unable to control their behavior.  Yet, I have to admit that Lo's depiction was compelling and you gradually become accustomed to it.  Ellison's skill with characters doesn't stop there.  The supporting roles (Flynt and the other street people, Lo's parents, etc.) are also well drawn.  No one is particularly likeable (the book overall is quite gloomy), but they are memorable and well-developed.
Posted by Paul at 7:19 PM