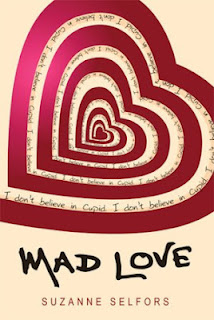 With her mother in a mental hospital, Alice has been trying to keep things together at home: pay the bills, take care of the house, and keep her mother's condition a secret from her fans and her publisher.  After all, it wouldn't do for folks to find out that the "Queen of Romance" Belinda Amorous was nuts!  But time and money are running short.  If Mom doesn't get well soon, everything will be exposed.

And yet, there are even more immediate problems to address:  a young stranger who thinks he's actually Cupid, a jealous girl who tries to extort Alice (in order to get her new horror novel - "Death Cat" - published), and a crush on a local skateboarder.  Never mind the unusual heatwave that's hit the city of Seattle!

This rather crazy combination of elements (and a similarly odd assortment of memorable characters) actually work pretty well.   The story can become a bit absurd at points, but that's the point of a book that truly finds love to be a bit "mad." The result is an entertaining book, even if the storyline is not the most coherent one out there.  I think it all could have benefited from a few less subplots, but I liked it.  Of course, I personally enjoyed the many gratuitous Seattle references (which include even a shout-out to Swedish!).
Posted by Paul at 6:37 PM