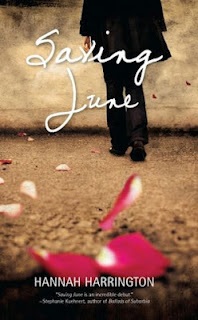 After June kills herself, her younger sister Harper and Harper's best friend Laney decide to steal June's cremains and take them to California (to honor June's desire to go to school out there).  To make the road trip possible, they recruit a boy named Jake.  Jake's a music fanatic and their road trip becomes an exploration of musical culture.  He also harbors secrets about June and Harper is determined to figure out how they knew each other.  But most importantly, Harper feels romantically drawn to Jake, which is confusing since he holds very little appeal to her.

As a HarlequinTeen novel (yes, it truly is!), I expected a lot more romance (and implied sex) than I got.  Instead, the book is really a fairly typical YA book.  That makes it better than the heaving bosoms I was expecting, but maybe a bit dull.  We have teens dealing with grief, copious references to classic rock, explorations of the US on the back roads (does anyone take boring Interstates in road-trip novels?), and falling in love with people they claim to hate.  It was a fine book (decently written, well-developed characters, fine dialog), but it was just like so many other books.  There's little new ground here.
Posted by Paul at 1:34 PM