There Is No Dog, by Meg Rosoff 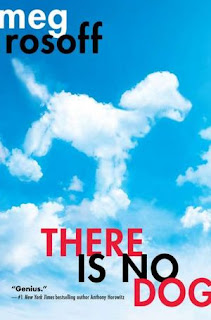 Imagine that God is nothing more than an adolescent boy.  He lies in bed for all hours of the day, dreams of having sex with every girl he can, and (every so often) happens to create a new species or a miracle when he feels like it.  Wouldn't that explain a lot?  God's plan seems unfathomable?  Maybe it's no more mysterious than a teenage boy's sloth! Crazy weather or other acts of god?  Maybe they're nothing more than that same boy's tantrums.  Assisted by an older and wiser adviser named Mr. B, and accompanied by his pet Eck (the last of its kind), this god (or "Bob" as his family calls him) is an oddest image of the Divine Spirit to date.

In Rosoff's latest novel, she takes a turn to the silly, diving into territory probably most memorably explored by Douglas Adams.  Imagining God as a petulant, self-centered, moping boy is an amusing concept, but it's also a joke that wears thin quickly.  Rosoff apparently doesn't care much for adolescent boys (and holds them in pretty low esteem).  As a result, Bob isn't a very interesting character.  He's incapable of growth or depth.  Rather, the humor of the story pretty much depends upon his character having no personal growth at all!

It's a literary dead end and thus the story stagnates.  To move at all, Rosoff relies upon ever-increasing levels of absurdity, which left me wondering what the point of the story was.  What do we really learn from finding out that fish can fly?
Posted by Paul at 7:39 PM