The Year We Were Famous, by Carole Estby Dagg 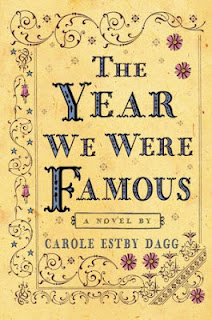 In 1896, Clara Estby and her mother undertook a mission to walk alone (and with no money) across the United States from Spokane to New York City.  They had two goals: to prove that two women (with no help from men) could do such a thing and, in the process, collect a 10,000 dollar prize which would help them save their farm.  Fighting the elements, bandits, and wild animals, the trek proved to be the adventure of a lifetime: meeting Indians, governors, and even the president-elect.  The fact that the story is actually true makes it even more interesting.

It's a historical drama, with some smooth character development. It was particularly nice how Clara really grew to understand her mother better during the trek and -- in the process -- crossed over the threshold to an adult-adult relationship with her.  On its face, this is a predictable dramatic development in a story like this, but it is handled so naturally, that it never felt contrived.  Best of all, there's plenty of interesting trivia to pick up along the way (ranging from the fact that many Western states granted women suffrage long before the nation as a whole, to the mannerisms of the people of the time).  I learned a lot in a fairly painless way.  Finally, I liked the ending, which strikes a perfect balance between happy and sad.
Posted by Paul at 12:28 PM