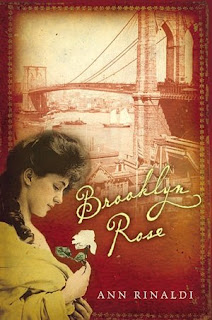 Inspired by the true story of the author's grandparents, Rinaldi writes about how a rich silk merchant from Brooklyn courted a fifteen year-old girl from the outer shores of South Carolina.  And how that young woman settled in to a new life up north.

There are minor adventures along the way and the book has nice period detail.  Written in the form of a diary, without any attempt to form a true narrative arc, the story lacks much of a plot beyond serial episodes.  The characters are not really developed either.  Even Rose, the diary's author, never really reveals very much about herself.

At only 200 pages and very large type, the story certainly had room for expansion and for us to learn more about these people. Whether Rinaldi avoids that out of a desire to not embellish too much on her ancestors or for some other reason, the trials of adapting to a new life in New York is largely left unsaid (even though petty issues are certainly mentioned).  The overall effect is like having a conversation with a taciturn grandmother, neatly glossing over details in her golden years.  One wishes that there was more to the story.
Posted by Paul at 5:30 PM