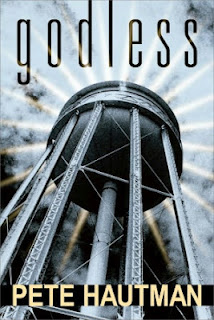 Jason has his doubts about religion.  Despite his parents' efforts to keep him on the straight and narrow by sending him to a teen religious group, Jason finds the whole thing inane. Some of his friends are devout, but Jason simply doesn't really believe in the existence of a Supreme Being.  After all, the stories don't make any sense.  It's about as ridiculous as worshiping a water tower!

And so Jason, on a lark, decides to create a religion based on the local water tower.  At first, it is great fun and he enlists several friends to join him.  They develop a scripture, mock rituals, and offices.  They climb the tower itself to hold "mass." But things get out of hand as people start to take things too seriously.

The idea is clever and Hautman tries to make some observations about youthful religious doubt, but I never got fully engaged in the story.  At times, Jason can be funny and even sympathetic, but overall he's limited.  The characters do some goofy stuff, but don't grow enough to provide the payoff for readers to pay attention to their searches.  Jason himself ends up pretty much the same doubter he was in the beginning.
Posted by Paul at 6:49 PM