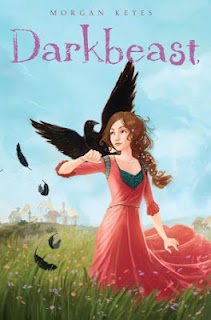 Keara is about to have her 12th name day and when young people turn twelve in her world, they are obligated to present their companion "darkbeast" in Bestius's godhouse and kill it.  For nearly her entire life, Keara has lived with Caw (a raven) who has communicated with her telepathically and guided her when she made mistakes and bad choices.  Now, as she approaches adulthood, the ritual slaying of her darkbeast is required by tradition.

Everyone has a darkbeast.  For most children, being rid of their darkbeast is something that they look forward to it.  But for Keara, too much is tied up in Caw -- the friend who has kept her company when no humans quite measured up.  And, despite the promise of becoming a young woman, she fears the horrible moment when she must end Caw's life.

I loved this book for many reasons.  In addition to the fact that it was well-written, with good pacing and interesting, well fleshed-out characters, I loved the concept.  Taken literally, the idea of twelve year-old children murdering their pets to achieve adulthood is repulsive, but that misses the point.  Rather, it is a wonderful analogy:  the darkbeats is a device through which children can relieve themselves of guilt and learn from their mistakes. To grow up,  they must throw it off so that they can become responsible for themselves.  The feelings that Keara has towards Caw will feel very familiar and immediate to the book's intended middle school readers.

Then there is Keyes's absolutely amazing detail.  Keara's world, while alien and different, is exquisitely drawn out.  With details ranging from the pantheon of deities to little things (like the villages collecting ashes to make soap and various dietary miscellanea), Keyes put a lot of thought into the setting and shares much of this world with the reader.  So, the story works not just as a fable with highly relevant observations about the pain of growing up (and the difficulties that people who buck convention face), but also as a thrilling tour of a complete and logically consistent world that is so different (and in surprising ways, very similar) to our own.

In sum, a truly astounding and beautifully crafted fantasy book for middle readers.  The book comes out on August 28th - look for it!
Posted by Paul at 11:27 AM