Larry and the Meaning of Life, by Janet Tashjian 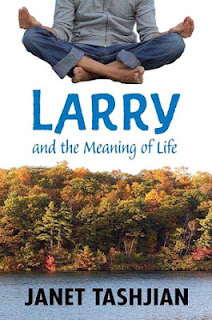 In the first and second books in the series, Larry (a.k.a. Josh Swenson) saved the world and tried to get elected as POTUS.  How do you top that?  The answer is by not trying to do so.  The trial for the third book is much more modest: Josh has lost his will for change.  It's a few months before he goes off to school at Princeton, but he doesn't really care.  He no longer writes anti-consumerist manifestos.  He's even given up on trying to find his ex-girlfriend.  Instead, he just sits down at Walden Pond and ponders the wisdom of Thoreau.  But one day he meets a man named Gus, who offers to become his spiritual teacher, and an opportunity opens for Josh.

Very much in the spirit of the other books, but at the same time different.  The scope is smaller and while elements of the plot are just as contrived, having a smaller scale makes them seem somehow more realistic (or at least plausible).  Larry still seems a bit goody-goody but the preaching is curtailed (the novel's primary cause seems to be eradicating landmines this time, but it's not pursued heavily).  I suppose people could criticize this book for not being as agenda-laden, but I appreciated being cut a break.
Posted by Paul at 10:01 AM