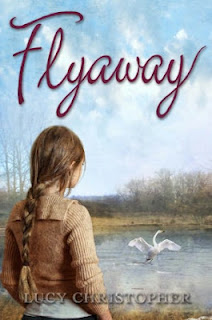 Isla and her father bond in the early morning hours over following the migration of the swans.  They tirelessly trudge after the birds, trying to protect them and study them at the same time.  But those trips are interrupted when Dad gets sick.

At the hospital, Isla makes two discoveries:  she befriends a sick boy who shares her love for the swans and she discovers a swan in a nearby pond that has lost its flock.  So, now there are three things on her mind:  helping her father get better, hoping the boy gets well, and finding a way to reunite the lost bird with its flock.  Along the way, she also deals with her grandfather's fear of hospitals and with her feelings about various boys (including the sick one).

It's an odd and unusual book that defies convention.  There's a little bit of Fly Away Home, but also threads about family reconciliation, first kisses, and solving ancient mysteries.  At times, the story is strongly realistic, but flies (so to speak) into fancies at other points.  The overall result will probably fly over the heads of its target demographic (and truthfully left me a bit confused).  I'm really not sure what to make of the book.  I finished it (so it can't be that bad) but it's really hard to see what it was trying to do.
Posted by Paul at 1:17 PM