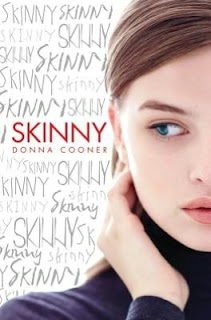 Ever Davies has a weight problem.  At over 302 lbs, she feels completely out of control of her body.  She's subject to the usual taunts from classmates, but she's her worst critic.  A voice within her head (who she's nicknamed "Skinny") taunts her constantly.  Skinny tells her that she's fat, that she's unloved and unlovable, and that no one wants to be around her.  And, while Ever realizes that Skinny isn't real, she's grown to believe every word that she hears.

When it becomes too much, Ever seeks out a drastic solution: gastric bypass surgery.  And while the surgery helps reduce her weight, it doesn't make Skinny's voice go away.  Instead, it seems that the world grows crueler and more complicated as Ever's physical appearance changes.

I have complicated feelings about gastric bypass surgery (especially for teens).  I dated a person who had had the procedure so I understand the complexities of eating disorders and what gastric bypass can (and can't do) to help.  It is a bit disturbing to me that Ever's character is allowed to go through with the procedure when the causes of her overeating are so obviously psychological (and tied to her egomania).  I do give credit to Cooner for never claiming that it was a solution, but in many ways I'm not sure that she went far enough.  And the eventual solution to Ever's problem is a bit vague and muddled.  I worry that readers may well see the surgery as the cause for Ever's eventual self-acceptance.

All that said, I found Cooner's story compelling and interesting.  She does an excellent job of getting us inside of Ever's head.  I got a bit weary of Skinny's voice, but I understood the point of it and I think that it (unfortunately) speaks to a lot of young people.  They will recognize the pain of self-loathing.  Readers may lose patience with Ever's cluelessness (about the kindness and caring of her friends, who she treats pretty badly), but when she eventually comes round, we all get to cheer.

Disclosure:  The book will come out on October 1st (I received an ARC from Scholastic, but no other compensation for this review - my copy of the book will be donated to our local library).
Posted by Paul at 7:13 PM