The Age of Miracles, by Karen Thompson Walker 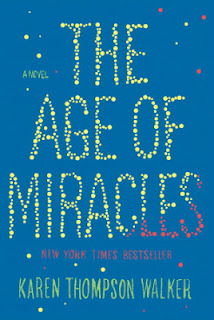 When the rotation of the Earth suddenly begins to slow down, the effects are initially subtle but ultimately cataclysmic.  Every day grows five minutes longer.  Within months, the duration of day light and night time have doubled.  At first this causes minor inconveniences, like deciding whether the "day" should be a cycle (and grow steadily longer) or whether it should remain 24 hours (and fall out of sync with physical reality).  But the changes become more and more grave, as the tides become extreme, the climate changes, flora and fauna begin to die, and the Van Allen Belt collapses, letting in deadly solar rays.

Meanwhile, for eleven year-old Julia, there are changes as dramatic taking place:  her body and the bodies of her friends are changing, her friendships are collapsing, and the rules of nature at school are evolving.  At home, her parents are growing distant to each other and to her.  Even her grandfather is becoming different and more distant.  So many changes!

It's an interesting experimental book, combining science fiction and apocalypse with more common middle reader fare.  I like the juxtaposition of end-of-the-world with starting middle school and the novel frequently contrasts Julia's changing world with the collapse of civilization quite effectively.  But after a while, the point has been made and I started looking for more.  Unfortunately, the book doesn't deliver it.

There are plenty of great anecdotes (moments taken from the author's own childhood perhaps?) and the usual suspects (bra shopping, first kiss, dealing with cliques, etc.) but nothing really new to say about them.  And the apocalypse material can grow distracting (particularly, since it's more original and interesting).  Julia and her family are never really developed.  Instead, we go from one episode to another -- we know what they do and how they reacted, but aren't really allowed inside of their heads to see what makes them tick.

I have previously observed that male writers often prefer to write action (packing their novels full of activities and events), while female writers are more likely to create books where little or no activity occurs.  Instead, we spend the entire story inside of our characters' heads (and hearts).  The stereotype is crude and not altogether true.  There are male writers who do a wonderful job getting inside of their characters' heads.  Walker, I think provides an example on the other side (a woman who writes an effective action story).

As a sci-fi adventure, this book works well enough, but the pesky girlie stuff then becomes a distraction.  For anyone else interested in Julia's coming of age, the end-of-the-world material is scary and overpowering.  Her story gets lost. And thus the book is a paradox: not written in a way that will appeal to either traditional audience, it falls through the cracks.  You can love it for its originality and for busting through standard marketing, but finding its readers will be a challenge.
Posted by Paul at 4:05 PM