The Minister's Daughter, by Julie Hearn 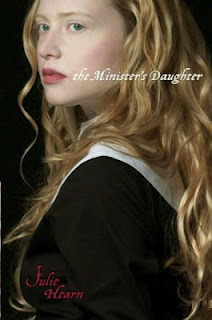 Told in two distinct separate narratives (separated by a half-century), this is the story of Nell, the granddaughter of a village healer, who suffers at the hands of the town ministers' two daughters.  The eldest daughter (Grace), desperate to cover up her illegitimate pregnancy, claims demonic possession, pointing the finger at Nell and her grandmother.  With rich historical detail and some (slightly distracting) subplots about the English Civil War and local pixies, we see the terrible way that minor transgressions quickly escalate into deadly tragedies.

It's an enthralling story, but unfocused.  Hearn doesn't seem to know if she wants to write a paranormal story or historical fiction.  The pixies and fairies are intended to illustrate rural folk beliefs of the period, but they are jarring in a story that is otherwise rooted in historic reality.  Given the choice, I'm a greater fan of good history and the story didn't need the supernatural creatures (even though Hearn weaves them in pretty solidly).  I also found the ending a bit of a let down.  The blurb promises a shocking conclusion and it certainly has a bit of pathos, but seemed underwhelming compared to what could have been done with it.  Overall, a beautiful book, but a bit of a letdown.
Posted by Paul at 1:39 PM