The Perks of Being A Wallflower, by Stephen Chbosky 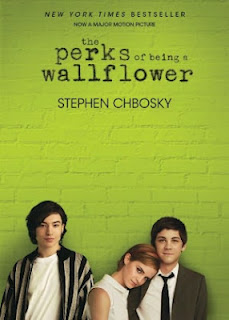 In a series of letters to an anonymous recipient, Charlie writes about his discoveries and fears during his first year of high school.  He has more than a normal share of them:  struggling with love, sex, drugs, alcohol, violence, and hanging out with a group of equally messed-up seniors.  In ways that are never really explained, Charlie is a bit of a simpleton, and his naive observations can be both endearing and shocking.

Apparently, one of the more "challenged" books in American libraries, the explicit nature of the book makes it a perfect "forbidden fruit" (and thus immensely popular with teens).  However, this is something of a distraction as the appeal of the story is not really its sins, but the basic decency of the narrator.  Charlie's naivete and well-rooted moral compass makes him a regular good guy throughout, even if his social ineptitude gets him into heaps of trouble.

That said, Charlie's ignorance can be a grating device.  The cause is never identified - an artistic conceit meant to keep us wondering (and one that won't work on the big screen), but it is at times a bit too precious.  Without an outside observer, I found myself getting suspicious of the narrative, and distracted by the attempt to figure out what was "really" going on.
Posted by Paul at 3:47 PM