The Sledding Hill, by Chris Crutcher 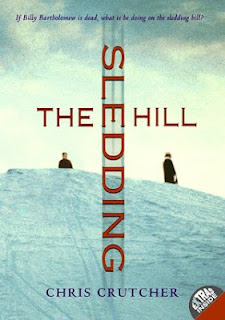 Elliott has suffered a double whammy:  his best friend and his father are both killed within three weeks of each other in separate accidents.  In both cases, he's the one who first discovered them. With a touch of ADHD, Elliott in general has trouble communicating and decides to deal with his losses by shutting down and going mute.

His plans to lay low, though, are challenged when his town is plunged into a censorship debate that pits a liberal English teacher against a bigoted minister and his church.  With the help of his late best friend's father and the ghost of the best friend himself, Elliott goes up against the church.

It was probably intended to be clever, but Crutcher's decision to put himself in the story and make one of his books (admittedly, not one that actually exists) into the challenged text seemed like incredible hubris.  Reading repeated testimonials from the characters about how transformative Crutcher's writing is (from the pen of the author himself) seemed self-serving.  My immediate (uncharitable) reaction was that Crutcher's writing is not in the same stratosphere as the literature that one normally associates with challenged books.

And there is no getting around how dreadfully Crutcher actually writes.  His command of grammar is weak and despite apparently significant editorial intervention, there are some pretty obnoxious errors (it's "would have" not "would of"!). The characterizations are weak and facile.  An attempt to humanize the minister by belatedly bringing up childhood abuse is half-hearted.  Crutcher's primary position seems to be that organized religion is intrinsically evil and plagued with mob-mentality.  It's fine for dramatic license, but it doesn't really enlighten the reader about the debates surrounding challenged books.  The overall story is awfully random.  The ghost best friend is a bizarre character, to put it mildly, and the relationship with the grieving father and his own mother are left underdeveloped.
Posted by Paul at 1:49 PM