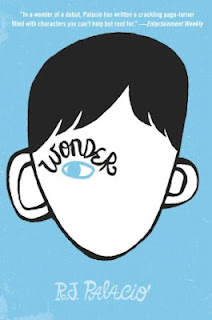 "The universe has not been kind to Auggie Pullman," says one of his friends.  And, at first glance, that is true.  August has a lot of challenges.  Born with facial and cranial deformities, he's endured numerous surgeries and yet he still shocks people when they first see his face.

In fifth grade, his parents decide that (after years of homeschooling) he should be mainstreamed and enter regular school.  The idea terrifies August.  He's a bright kid and knows how people respond to him.  Can he be brave enough to face that every day?  He isn't sure, but he's about to find out!

It's a lovely premise about a boy with a flawed exterior and a heart of gold, struggling to win over his peers.  Engineering the story to make you root and cheer for Auggie, Palacio is reluctant to show his hero's flaws.  August is intelligent, caring, and patient with the cruelties of his peers.  I didn't buy it.  Showing August make some mistakes and bad choices would have made him a more endearing boy, rather than the Buddha she has crafted.  Instead, the set up is straightforward:  August is good (although he occasionally gets mildly upset at the treatment he receives) and the kids around him fall into two camps (evil and good).  A few of them may backslide, but if they are good, then they come around.  It's all too simplistic and we're deprived the opportunity to really explore why even kind people might not always behave well.

And then there's the narrative design itself.  I was fine when August was telling his own story, but Palacio regularly shifts the storyteller -- in a GoTo Meeting-like style -- from one character to another.  Sometimes, this reveals interesting information about the side character, but rarely does it tell us much about August or about how that temporary narrator feels about August.
Posted by Paul at 8:51 AM