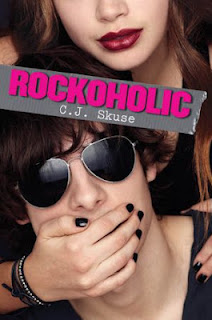 Jody's a bit obsessed with Jackson Gatlin, lead singer of The Regulators.  So, nothing's going to stop her from seeing them in concert -- not her mother, not a full day waiting in line for front row seats, and not some kid vomiting on her while she waits in the line. When an accident in the mosh pit lands her backstage in the infirmary, she misses most of the show but she gets to meet her idol face to face.  And she makes a split second decision to kidnap him.

At first, it is surprisingly easy to guide Jackson back to the car and spirit him back to her home, but then she finds that that is because he doesn't really mind being abducted.  Also, that he's a bit more than she can handle, being a detoxing speed freak with a nasty temper.  It will take some creative foot skills for Jody and her friend Mac to keep Jackson under wraps from the paparazzi and a homicidal manager.  Rock on!

It is, of course, just a bit over the top.  And it could be great fun, if it wasn't for the gross out factor (vomit plays a prominent role in the story) and the utter annoying nature of Jody herself.  She isn't just an obsessive fan, but also a complete ditz (or "stupid cow" as her friends put it, since they're British).  I haven't quite figured out if British YA writers think young women are stupid, but it does seem to be a trend in UK YA that the girls are dumber.  I suppose you can sit back and laugh at the how irresponsible and thought-free they are (and at all the barfing too), but I found it annoying.  I did, however, read the book all the way to the end and it turned out OK, so maybe if you're into the characters more than me, you'll enjoy it.

[Full disclosure:  This one came to me as a free advance copy.  The book comes out in November.]
Posted by Paul at 7:52 PM