The Difference Between You and Me, by Madeleine George 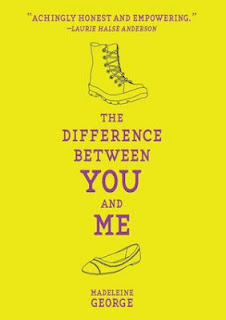 Jesse is a rebel and an outcast, from the huge fisherman's boots she wears to the angry manifestos she posts on the walls at school.  She's got an agenda and she's not shy about trumpeting it.  Emily, on the other hand, is the perky clean-cut student government vice president with a plan for everything and an explanation for every twist and turn in her life.  Nothing scares her more than the chaos and disorder that epitomize Jesse's life. Together, they are an unlikely couple, and yet are strongly attracted to each other. However, as hot as it gets between them, it is all under wraps as Emily must maintain a perfect sheen to the outside world.  Jesse, strangely enough, tolerates this because of her serious lust for Emily.  However, these compromised arrangements come undone when a big box store comes to town and the girls find themselves on opposite sides of the debate over whether such stores benefit the communities in which they operate and whether corporations have a place in public schools.

I absolutely loved the human interactions in this story.  From the way that the girls talk to each other to the interactions that Jesse and her parents have, the dialogue and the behaviors rang true.  I was less thrilled with the plotting, which was uneven and cluttered with subplots.  Perhaps because I found the relationship of Jesse and Emily to be so interesting, I really didn't care about anything but the girls, and I found myself racing past anything else in the book to get back to them.