The Disenchantments, by Nina LaCour 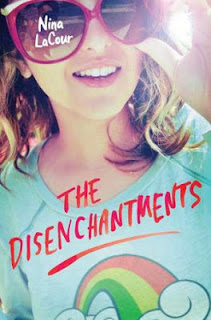 Upon graduating from high school, Colby knows exactly what he's going to do for the next year:  go on a short tour up the West Coast with The Disenchantments (an all-girl band, made up of his three best friends from school).  None of the members can play, but what they lack in talent they make up for with spirit and energy.  Afterwards, he and Bev (one of the girls in the band) are going to bum around Europe for the rest of the year.  Afterwards, perhaps they'll go to college.

However, on the first day on the road, Bev confesses that her plans have changed and that she's going to Art School in the fall instead.  Naturally, this makes life on the road together a bit awkward and tense.  As with all good road trip stories, there's plenty of discovery along the way.  By the end, Colby figures it out and learns that often life just hands you random stuff.

It's a very dialogue-heavy book, without much of a narrative thrust.  The plot just rolls along however it feels and the characters spend a lot of time talking.  For this reason chiefly, the book never managed to grab me.  It isn't that it was dull, but simply not very adventurous or ambitious.
Posted by Paul at 8:42 PM