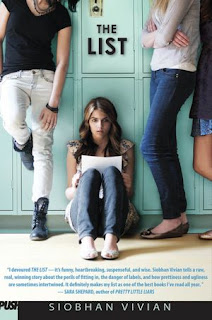 Every year, a list appears at Mount Washington high school.  No one knows who creates it.  The list simply appears one morning, attached to every wall and locker possible.  It names the hottest girl and the ugliest girl in each class.  This act of mischief, cruelty, and hazing becomes a tool that the novel uses to navigate us through how eight young women deal with being singled out and labeled.  Their reactions range from despair and desperation to denial, but without exception the experience affects them, often in very surprising ways.  By the end of the story, we even find out the identity of the list's author and why they created it, but by that point, it almost doesn't matter -- the list has taken on a life of its own.


Vivian points out that, surprisingly, being labeled the "prettiest" is not necessarily a good thing (and likewise being called "ugly" is not necessarily a curse).  Instead, it is really the fame of being called out that is life-changing.  And it is the way that society treats people who are nominated to these roles that is most telling.  The story covers a broad canvas of personalities and reactions.  In doing so, we get a reflection of a much bigger world -- of how young women (and many adults as well!) allow themselves to be defined by others, and what it takes for each one to overcome it.

On its face, this is well-tread territory, but Vivian breathes new life into the subject by trying to cover so much ground.  At the same time, it is hard to keep track of eight different stories.  At times, I wished for a simpler narrative, maybe 2-3 characters instead of eight!  Still, it's hard to imagine which roles could have been cut.  Each one of the eight girls has something to teach us.  There's a lot of cold hard truth here and lot of raw frailty and doubt on display.  It doesn't make for comfortable reading, but it will certainly make good fodder for discussion!
Posted by Paul at 7:12 PM