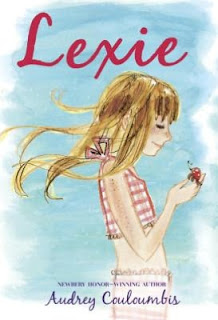 It's the first summer that Lexie's parents haven't been together, so it feels particularly weird to be going out to the beach house with only Dad.  Weird to leave her Mom in the city, but also a little good - a feeling with which Lexie struggles.

When they get out to the shore, Lexie is in for number of surprises:  Dad has invited a "friend" to join them and she's coming with two boys.  Lexis is torn about this:  she hates having to share her father with other people, but she grows to like the boys and even her father's friend.

Couloumbis can be a bland writer.  I didn't care much for her acclaimed novel Getting Near to Baby because I found it dull and boring.  However, for a story with this book's subtle complexity, Couloumbis's style works well.  The characters here are smart and insightful and the feelings they express are complicated.  It is a gentle story that avoids melodrama and instead explores how the process of changing families can be both good and bad at the same time.  Lexie and the boys are allowed to both love and hate the changes that are happening around them, and even the adults get to express their feelings as mixture of joy, fear, and sadness.  While the kids can seem a bit precocious at times, I think that is mostly because we are used to dumbed-down characters in books like this.  In the world of Lexie's beach house, it all seemed quite reasonable.  The story itself breaks little new ground, but its treatment of the subject of divorce and remarriage makes this smart little book notable.
Posted by Paul at 4:04 PM