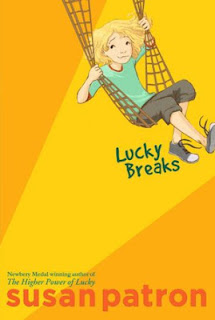 Lucky and the odd-ball inhabitants of Hard Pan have aged a year or so.  Brigitte is trying to learn how to become an American (as well as a good mother to Lucky), Lincoln is mastering his knot tying skills and working out the secrets of the universe, and Miles - while still a bit weird - has been declared a genius.

And now there's a new girl - Pamona - the niece of a scientist working in the area.  She's the same age as Lucky and - Lucky hopes - might potentially become her best friend.  But Pamona also shakes up things as Lucky struggles to come to terms that in order to have a best friend, one has to be a best friend (and not just to Pamona, but to Lincoln and Miles as well).

It's been a while since I read the first book (The Higher Power of Lucky), but I remember being enchanted by the quirky characters, gentle storytelling, and kindheartedness of that book.  That all continues here, but in the sequel it wears a bit thin.  Maybe it's because the story itself never really gels, but instead rambles around between subjects.  Or maybe the appeal of the original is lost once the novelty fades.  Either way, I found it hard to engage with the book.  It was pleasant to read, but ultimately forgettable.
Posted by Paul at 4:16 PM