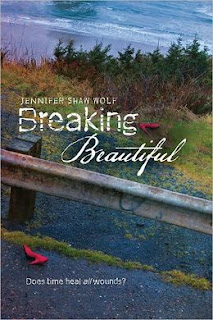 After the accident, Allie can't remember the details of what happened to her and her boyfriend Trip.  She doesn't know how she got her injuries (although she thinks she got thrown out of the truck) or why the truck went over the guardrail and into the ocean (taking Trip with it).  And while she wants to believe what the police are telling her -- that it was an accident -- she isn't sure.  Something about it doesn't seem right.

As she tries to remember what happened and also tries to rebuild her life, she discovers that the people in her small town aren't exactly sure about her either.  Gossip leads to accusations and Allie's troubled friend Blake becomes a suspect in a murder investigation.  If only Allie could remember what really happened!

The story begins with a promising start, but it gets dragged out.  Allie has a lot of trouble coming to terms with the abusive nature of her former relationship with Trip.  Survivor's guilt and general denial seems realistic enough and some struggling from Allie adds to the drama of the story.  But at some point, her refusal to seek help (or even tell the truth) becomes just plain annoying and implausible -- and more of an excuse to drag out the story than to explore the psychic damage of abuse or the recovery process from it.  And the ending of the book itself is a mess as Wolf strives for maximum melodrama in resolving the story.
Posted by Paul at 3:02 PM