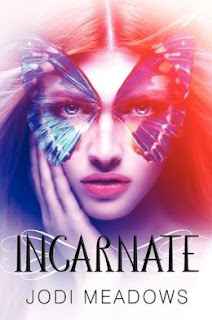 For as long as people in the Range have known, everyone is reincarnated when they die and the number of souls (and bodies) has been remained static.  Everyone, that is, except for Ana.  She's a "new soul" (or, as her mother tells her frequently, a "non soul") and not reincarnated at all.  She is, her mother says, a mistake.

But Ana is not convinced that she is as bad as Mom claims.  And after eighteen years of abuse at her mother's hands, Ana is ready to strike out on her own.  Ana's convinced that the answer lies in Heart, the capital city.  There, she hopes to get some answers about her origins and find out why she is the only one who is not reincarnated from a previous life.  On her way to Heart, she befriends a musician named Sam who becomes her guardian, mentor, and object of affection (although not quite her lover).  Acid-spitting dragons, wraith-like beasts called "sylphs," and Ana's meddlesome and evil mother fight her along the way.

It's an interesting setting and premise, but the story itself is a bit too leaden with adolescent rebellion. Ana's evil sadistic mother is more fantasy than the dragons and the wraiths, and a bit too much attention is spent on her.  I get the appeal to young readers, but the lengths to which Mom goes to get between Ana and Sam are ludicrous and some of the weakest parts of the story.

On a whole, the story starts off strong, but loses focus midway (about the time that Ana and Sam reach the city).  At first, we have the interesting thread of how (after years of emotional abuse) Ana has trouble trusting Sam.  But once the dragons show up, it starts getting weird, and the emotional growth is displaced by shooting and killing.  With a multitude of loose ends, I became painfully aware by the end that there must be a sequel to come (sure enough, due out in January 2013!).
Posted by Paul at 9:05 PM