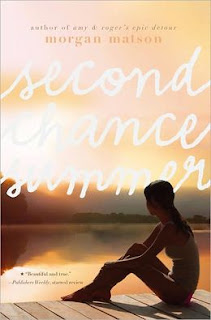 Taylor has always run away when things got tough.  Five years ago, she ran away from Lake Phoenix, from her best friend Lucy, and from her first boyfriend Henry. And she never planned to come back.  But when her father is diagnosed with stage four pancreatic cancer, he insists that the family to return to their old summer home on the Lake for one last summer together.  How are you going to argue with that?

And so, Taylor has to return and face Lucy and Henry again.  The return is difficult and her abandonment is not easily forgiven.  She expected that, but what surprises her is how it rekindles old feelings and makes her reconsider not just the decisions of her past but how her fear continues to control her life.  Her romantic feelings for Henry return and her longing to have Lucy back in her life points out the terrible costs of her tendency to run away.  Eventual forgiveness shows that second chances are actually possible.  The slow decline of her father, meanwhile, places some perspective on all this and how sometimes even a second chance is not enough.

Obviously, the ingredients here are guaranteed to be upsetting.  Between the nostalgia, the longing for lost friendships, and a dying parent, there had better be a Kleenex box nearby when you read this book! And since I do like a book that makes me cry, I'm going to like this one.  However, there are other things going for the book:  Taylor's emotions (and her fears, in particular) are very honest and striking.  The other characters have depth as well.  In a lengthy novel like this, we really get an opportunity to get under the skin of them all and it is an enlightening journey.  (The setting is beautiful, although I'm growing disturbed at the unusual socioeconomic status of the families depicted in these books!  Where do middle class people who can't afford summer homes go to have an amazing summer of memories?).

Still, the storytelling has some rough spots.  Matson has problems pacing the story, clustering events in spots and then having to skip past "a few weeks" or so until events get interesting.  It's understandable, but one wonders if she couldn't have planned the story a bit better to have a less jumpy chronology.  Also, dealing with lost romance and dying father may be too much for one novel.  Surprisingly, it actually works, but for the first half of the book, I felt like there were really two different stories going on.
Posted by Paul at 4:12 PM