The True Confessions of Charlotte Doyle, by Avi 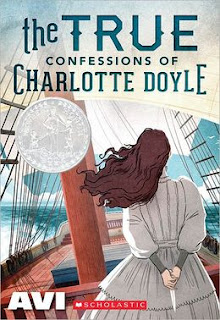 Scholastic has just re-released this with a new cover and a cheap price, and sent me a reviewer's copy to read...

Charlotte Doyle is looking forward to her trip across the Atlantic aboard the Seahawk.  But when the families with whom she is supposed to be traveling fail to appear, and members of the crew attempt to discourage her from showing up, she regrets the decision.  But already out at sea, it is too late!

Between storms, stowaways, and seasickness, Charlotte has a lot with which to deal.  However, it gets worse: the crew is mutinous and the captain is unhinged and cruel.  Before long, young innocent Charlotte finds herself thrust into the middle of plots and counterplots, and ends up accused of murder!

It's a vivid and exciting adventure on the high seas and a modern classic tale that has won its fair share of accolades and prizes.  It works, I think, because it is a good adventure with plenty of action, but features a girl, so draws in the girls as well as the boys.  There's great technical detail, so fans of naval adventures have plenty to bite into.  And it works on a human level as Charlotte has a heart and a strong moral core to make her an excellent heroine.  It's not much of a book for a moral or lesson, but you don't read books like this to learn about human nature.  Unfortunately, you do read books like this to be subjected to twenty course lesson plans in language arts classes (!), so if you are a grown up, enjoy the book as a free person!
Posted by Paul at 9:51 PM