The Unwritten Rule, by Elizabeth Scott 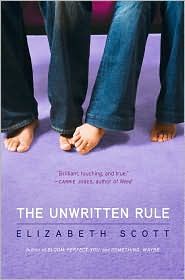 The unwritten rule is that you shouldn't fall in love with your best friend's boyfriend, but what if you loved him first?  And what if your best friend wasn't really acting like they should either?  Lusting about Ryan ought to be a non-starter for Sarah since Brianna is dating him, but Sarah can't help herself.  She also can't help but notice how poorly Brianna treats him (not that that would justify her desires, but it bothers her nonetheless!).  What she doesn't do as good a job of noticing is that Brianna doesn't exactly treat her that well either.

On its face, the love triangle ought to be a pretty tired genre, but Scott livens up the story by introducing a mild sense of evil (in the form of Brianna).  This is not done simply to make Sarah's betrayal of her BFF acceptable to the reader, but rather to add another dimension to it.

The story is also given legs by the way that Scott breathes real life into her characters.  Sarah is often wiser and more articulate than her years, but this gives her a chance to send the reader on a guided tour of the dysfunctions of her peers and their parents (Brianna's mother is a particularly formidible character).  So, while the action of the story doesn't surprise, the interactions of the characters do tread new ground -- particularly the complicated relationship between Sarah and Brianna.
Posted by Paul at 2:42 PM