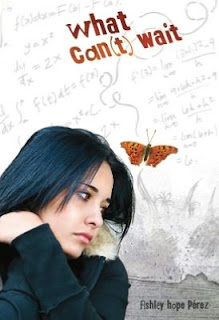 In the barrio of Houston, Marisa dreams of making something of herself.  It isn't easy.  She's good at math, bright and intelligent, and has supportive teachers, but between the need to work to help her family and their other demands, there frequently isn't enough time left to study or even attend school.  No member of her family shares her love for education and some of them (like her father) are downright hostile to her bookishness.  That would be enough or a challenge, but Marisa complicates things by occasionally messing up (especially with guys).  Still, she has a lot of drive and determination, and with some help from unexpected sources she just might make it.

It's a familiar story (Real Women Have Curves, anyone?), but a good one.  And told in this unvarnished and authentic fashion (with enough R-rated material to get the book-banners salivating), the novel has a lot of appeal.  It's gritty and sounds right (and not just because of the frequent use of Spanglish).

It's the character of Marisa herself that carries this story.  If she had just been this virtuous hard-working young woman pursuing the American Dream, I would have gotten bored pretty quickly, but Perez gets extra points for allowing her to be flawed.  You want her to succeed so very badly that when she screws up, it breaks your heart.  But Perez doesn't milk it.  For every mistake, Marisa dusts herself off and jumps right back into things.  So, yes, she's tough, but she's got a lot of heart (and a thin skin on the things that matter to her) so she's also very endearing.  I rooted for her from the start and stuck with her to the end -- and I think it paid off quite well.

Being a product of a nice anglo suburb, I don't tend to have much interest in urban culture (or stories placed in such settings), but a great heroine transcends their environment and anyone can enjoy this book.  If urban latinas find something special to like in the book, so much the better, but white guys will like it too.
Posted by Paul at 4:41 PM