It's Our Prom (So Deal With It), by Julie Anne Peters 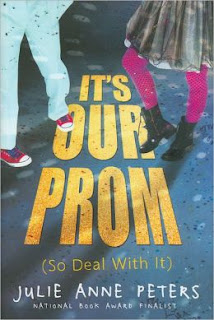 Azure has always considered proms to be totally bogus.  You have to be outrageously rich (and straight) to go to them, so only the super popular kids bother to show up.  When the principal asks her to form an alternative prom, by serving on the prom committee, she signs on with reluctance.  The opportunity to actually make something different is simply too enticing.

Needing help, she enlists her friend Luke.  He's busy staging a musical drama based on his coming out story ("Closets are for Mothballs"), which is slated to premier days before the prom.  Luke and Azure take turns (in alternating chapters) telling of their struggle to take control of the conventions of proms and make theirs more inclusive.

The story is a bit convoluted (and far more than just a story of staging an unconventional prom and play).  There's a love triangle of sorts, some familial struggle with sexual identity, a little school politics, and a very silly conclusion.  The book has got heart and Peters has certainly made another stride into the territory of books about LGBT characters who are incidental (rather than having the story be solely about their identity).  However, this particular story is so random and unstructured, and the ending so completely silly (and half-baked) that the book never came together for me.  The characters, including Azure and Luke, are underdeveloped and two-dimensional.  And there's not much point to the story beyond imagining how much fun kids could have at a prom that featured poetry slams and drag queens.
Posted by Paul at 6:56 PM