My Life Next Door, by Huntley Fitzpatrick 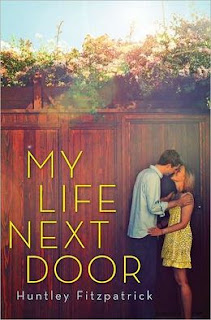 Ever since the Garretts moved in next door, Samantha has been fascinated with them.  They are the polar opposite of her own family:  anarchic, disordered, loud, and chaotic.  While Sam's mother kept a tight lid on Sam and her sister and everything had its place, Mrs Garrett and her noisy brood of eight children seemed to run wild.  Now that Sam is older, her interest has become focused on Jase, one of the older Garrett boys and nearly the same age as her.  Of course, a romance blooms, but with Sam's mother's open disapproval of the family, Sam finds herself hiding the relationship from her family.

That would have made a nice and unremarkable romantic storyline (boy and girl from opposite families find love and overcome the objections of their families), but Fitzpatrick kicks the story up a notch with an out-of-nowhere plot twist that raises the stakes dramatically.  By the end, Sam has to make some difficult decisions about where her loyalties lie and what really matters.  This last-minute twist adds some intensity but doesn't really add to the story in the end, becoming a distraction from the conclusion towards which we were heading anyways.

The meandering and unfortunate plot detour aside, I enjoyed the characters.  Jase and Sam had authentic voices (emotional, but not dumb) and were generally sympathetic.  I found them a bit precocious in their ability to maneuver amidst the Garrett larvae (I'd believe that Jase would have that talent -- having grown up with them -- but Sam comes out and says that she has little-to-no experience with smalls, so the adeptness with which she handles Jase's younger siblings defies belief), but it's cute that they do have these skills.  And the interactions with the littler kids add humor and pathos to the story.  As for the adults, they have flaws but come through in the end in a way that fulfills the YA lit need for kids to be on top, but without sacrificing the reality that grownups are not without problem solving skills of their own.
Posted by Paul at 5:54 PM