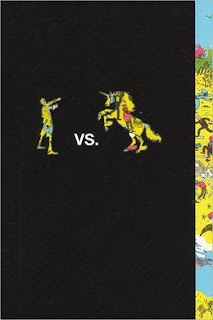 Definitely one of the more unique anthologies (with one of the more catchier recent titles to boot!).  This is a collection of short stories devoted to either zombies or unicorns.  Ostensibly, the purpose is to allow Larbalestier and Black to debate which creature makes a better protagonist.  To prove their point, they've enlisted the help of some high-power YA talent, including Meg Cabot, Libba Bray, Kathleen Duey, Garth Nix, Scott Westerfeld, and Maureen Johnson.

The stories range widely, but most of them are quite dark, which means that the zombie stories generally come across better.  Modern YA writers are apparently more comfortable with brain-eating zombies than with unicorns.  The best zombie stories in this case came from Carrie Ryan (a complex story of a Carribean island's attempt to survive), Alaya Dawn Johnson (a homo-erotic view of the undead), and Libba Bray (imagining prom night amongst the survivors).  Most of the unicorn authors re-imagined unicorns as mean and nasty, and most of the stories dragged a bit.  The notable exceptions were Meg Cabot's satire (despite its gratuitous mention of the SCA) in which a rainbow-farting unicorn rights all wrongs at a birthday party and Kathleen Duey's melancholy look at the perils of immortality.  While mentioned, the obvious subject of virginity doesn't feature as much as one would expect.

Most of all, I was disappointed that there was no story with zombies taking on unicorns directly (which I assumed from the title and the cover was the original intent).  I was hoping to see whose powers were stronger:  flesh-rotting zombies or health-restoring unicorns?  Now that would have been a cool story!
Posted by Paul at 2:36 PM